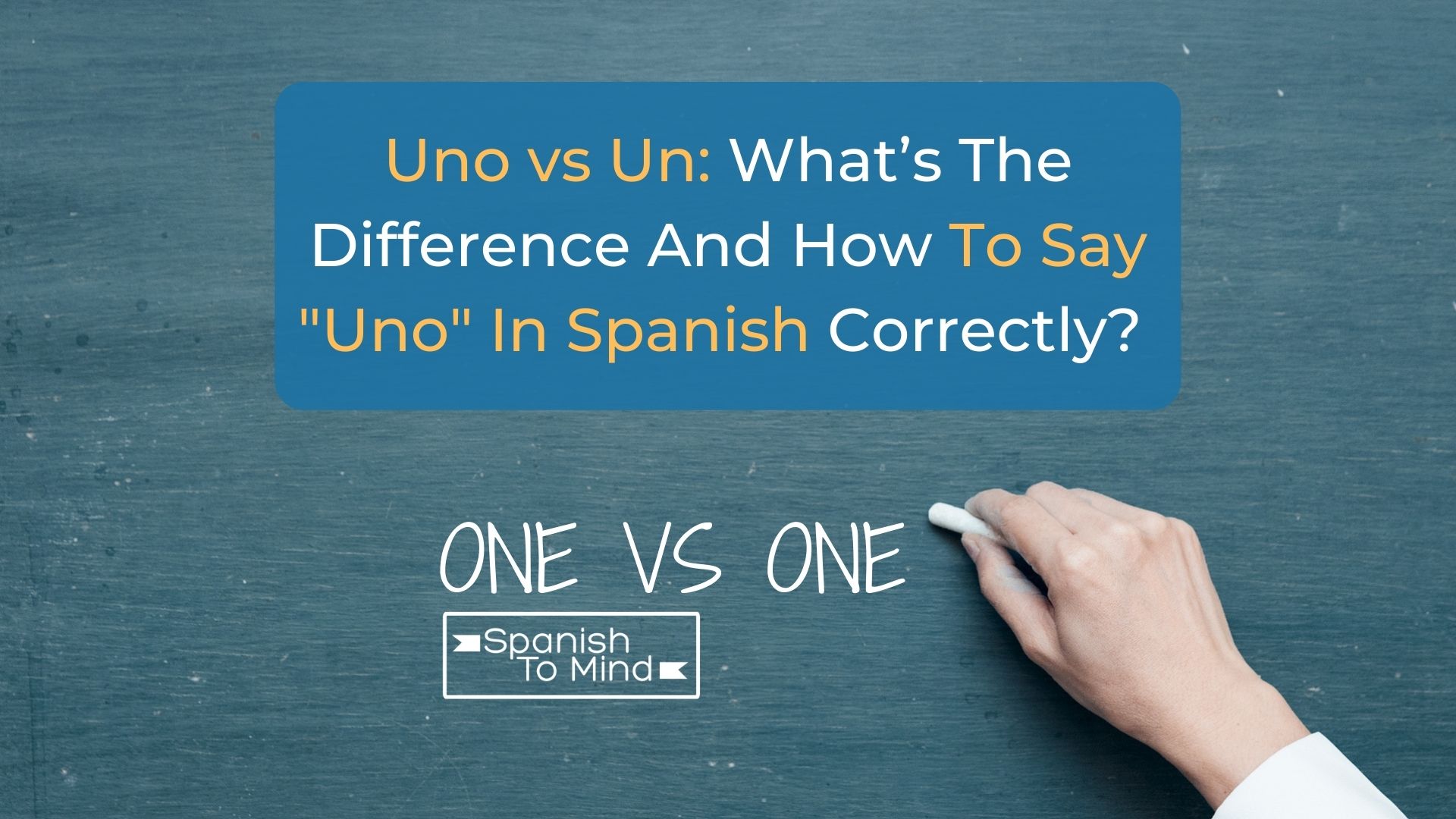 Uno vs un, What’s the difference between these two?

This is a common question that hits people who want to learn Spanish when they face sentences like:

But, what if you say…

The firs two sentences are right, and other two are wrong.

If you’re here, that means that you’d like to know what the difference between using “Uno” and “un” is, and how to avoid using them wrongly.

Doesn’t “uno” mean one in Spanish after all?

In this article, we’ll clarify this confusion so that you can build better phrases in Spanish.

Uno vs Un: We use “uno” for counting quantities.

First, we have to make something clear:

It isn’t the card game we all love to play with friends, though the name of this game is a good example to understand the difference between Uno vs Un.

If you want to win at UNO, you have to let everybody know when you remain with ONE card.

That’s when you yell: UNO!

Notice that we’re talking about how many cards you have… the quantity or the number of cards.

Another example of when to use “uno”, is when you’re working out.

So, here’s your first takeaway from this blog post:

Whenever you’re counting quantities or the number of things you have, we use “uno” in Spanish.

I know this will sound strange if you’re just beginning to learn Spanish, but you have to know this:

Words may be masculine or feminine in Spanish… weird, right?

If you want to know more about the genre of the words, let me know in the comments, and then I’ll try to explain them in another blog post.

Coming back to “Uno”…

If whatever thing you’re counting is feminine, then it will be transformed to “Una”.

We say “una” because the word “vaca”, which is the thing we’re asking about, is feminine.

The same thing happens in the following example:

Uno vs Uno: Which one should you use?

Having in mind that words may be masculine or feminine, here comes the bottom line of this article:

Whenever there’s a word that goes after “Uno”, it will change to “Un”, and it’ll be still referring to the number one.

Check out this example, so you understand this point better:

The word that goes after the number one in Spanish is “perro”, and this word is masculine.

If you say that, you’ll sound like a native speaker who has serious language issues.

This difference is easier to see if we use “uno”, and “un” with the examples you already saw:

Notice that “Uno” turns into “un” whenever a word goes after “Uno”.

Now, in the case of “Una”, which is feminine for the word “one” in Spanish, it wouldn’t change because it’s already being influenced by the genre.

“Un” may work as an article too

Something else you need to have in mind is that the word “Un” in Spanish might also work as an article before a noun.

However, when the noun is feminine, we’ll use “una” instead of “un”, like this:

In other words, we might say that whenever we want to say One in Spanish, and then we want to add another word in a sentence, then the number One would transform into an article.

How to internalize these differences

When native speakers talk, they never think about the genres of the words or the structure of the language.

Because when they learned in a very different way.

They learned to speak Spanish using their natural skills to learn languages, the same ones you used to learn your mother tongue.

And, yes… I know you’re probably thinking that, if that’s the case, then what you need is to move to a Spanish-speaking country or to go back in time and be born in Spain.

Of course, you don’t need to do that (and you can’t travel in time either… just saying).

What you can do is to accept my invitation to read my free guide:  7 Steps to Understand Fast Speaking Native Speakers.

You’ll get the guide as a welcome gift after signing up for my newsletter, and you may do it in the following form:

And there you go, you just learned the difference between uno vs un in Spanish.

To sum up, “Uno” means One, but whenever there’s a word that goes after “Uno” in a sentence, it will change to “Un”, and it’ll be still referring to number one.

“Una” is the feminine for “Uno” and, remember that “Un” might work as an article before a noun.

I hope this article was helpful and that you’re not confused anymore when you see “Un” or “Uno”.

If the point is clear to you, feel free to write down a couple of sentences in Spanish using these words and share them with me in the comments below.