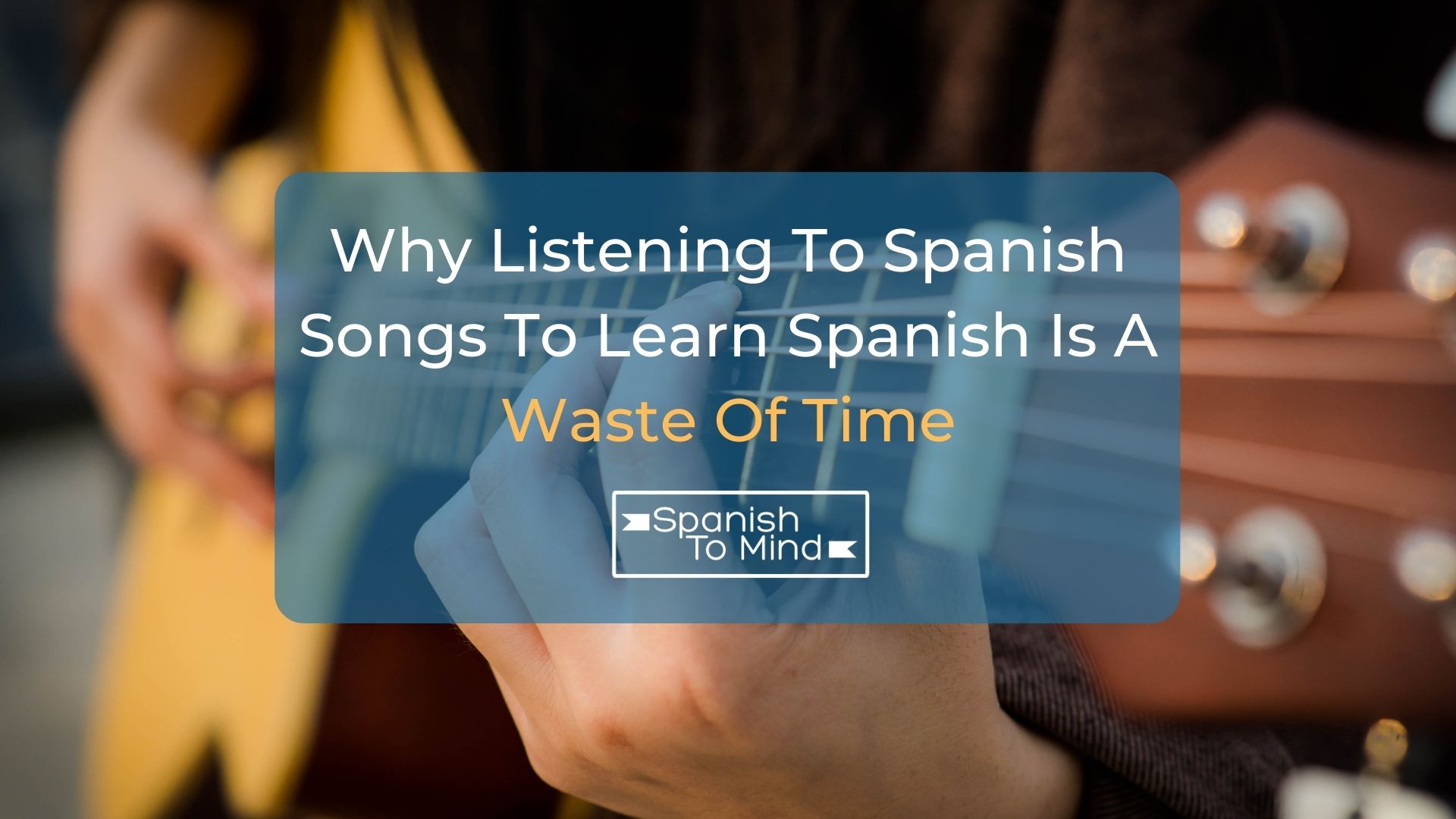 Do you like listening to Spanish Songs to learn Spanish?

Do you think doing it will improve your skills to engage in real-life conversations?

A more direct question: Should you listen to music to learn Spanish?

It may seem like a fun resource when learning languages, but music may not be as helpful as people say.

—“What! But, teachers say listening to music is a fun way to learn the language, don’t they?”—

In this article, you’ll understand why listening to songs in Spanish isn’t such a great idea after all.

If you learn to identify which are the most effective activities to learn languages, and which ones are a waste of time, you’ll make progress much faster.

Let me explain myself.

Spanish Songs to learn Spanish can become an excuse for many lazy students.

Something very interesting is that Spanish native speakers who want to learn English also think that music will help them.

The sad thing is that lots of people who like this music can’t speak or understand a single word in English.

Several years ago, I asked my friend Johanna (she’s Colombian) about how her English classes were going.

She told me she didn’t like to take lessons and she preferred to learn in a more fun way: listening to music.

I was quite curious when she said that, and I felt like I was losing my time when I was listening to stories in English.

Could she be having fun and making more progress?

Shortly after that conversation, Johanna never returned to class and simply didn’t learn to speak the language.

She never did, but she still loves singing “Don’t stop believing” by Journey at parties.

I tell you about this experience because many of my students say they listen to songs to learn Spanish, but they do that to avoid the work of sitting down to take their Spanish lessons.

You may be thinking now:

— Hey, I’m not lazy! I take Spanish lessons and music helps me learn too —

And that may be true.

You’ve probably learned a couple of words here and there whenever you hear JBalvin singing “Mi Gente”.

Because we all love the crazy jam reggeatón comes with, right?

But, think about this:

Language in music is hard to understand

It wouldn’t be a surprise if you tell me that some songs are harder to understand than others.

However, that may not have to do anything with the speed of the song.

Some songs may be difficult to understand because music is NOT material to learn a language, it’s simply art.

And artists can express their ideas in abstract ways.

In other words, many songs don’t send clear messages, even native speakers can’t understand what they say.

I mean, what’s the story really?

Can you describe it in your native language without having to clarify and say that it’s a little bizarre?

I don’t think so.

Easy to understand Spanish is better

When you’re learning Spanish, the best thing you can do is to Listen to easy to understand things, or according to professor Stephen Krashen: comprehensible input.

In plain English, what I’m trying to say is:

If what you hear is noise, you simply won’t learn anything.

If you don’t believe me, look at the lyrics of the song in Spanish “Lobo Hombre en París” by La Unión.

My friends and I always come to different conclusions when discussing its meaning.

What’s more, music is written in the form of a poem. It uses:

Needless to say, nobody talks like that in real-life conversations. Nobody cares if words rhyme or not.

The only thing that matters is communicating ideas efficiently and fluently.

You may be hearing the song wrong

In music, singers can change the way they pronounce words to make the song sound good.

Have you ever got confused with a song in your native language?

Perhaps thinking that it said something different than what you see in the lyrics?

My friend Yeison (he’s Colombian) told me that since childhood, and until he grew up and saw the lyrics of the song at karaoke, he thought the song said “tren azul”.

It seems like a small misunderstanding, but this happens to all of us with music.

So think about it:

If music can be difficult for native speakers to understand, It could even be harder for you.

So, why use it to learn the language if it could generate confusions?

You should look for easy-to-understand resources with more conversational, natural, and spontaneous Spanish.

Enjoy music instead of using it as learning material

I don’t mean that you shouldn’t listen to music in Spanish.

What I mean is: Don’t use Spanish songs to learn Spanish.

Yes, you may be able to learn new words by looking at the lyrics of the songs, but the music itself won’t help you speak Spanish easily, nor to understand native speakers.

In music you won’t hear:

And that’s exactly what you need to learn Spanish!

Instead of looking for Spanish songs to learn Spanish, you should browse the Internet and look look for:

Stuff like that is going to expose your brain to the language that native speakers use to communicate with each other.

Exactly what you need to learn!

When you’re listening to a song, you’ll hear a poem with melody and a lot of feeling.

That’s great if you want to appreciate the art that Spanish speakers bring to the planet, or to get to know the culture better.

However, if you want to learn Spanish, you have to expose yourself to conversational Spanish.

The language people use to talk to other people.

Now, if you were relying on Spanish songs to learn Spanish, and after reading this article you’re like:

—What the heck am I supposed to do to learn Spanish then? Learn grammar and memorize vocabulary again?—

You don’t have to do that.

You’ll learn a more effective, more powerful, and more fun way to learn Spanish if you read my free ebook in full Spanish:

You’ll get it as a welcome gift once you sign up to my newsletter in the form below: