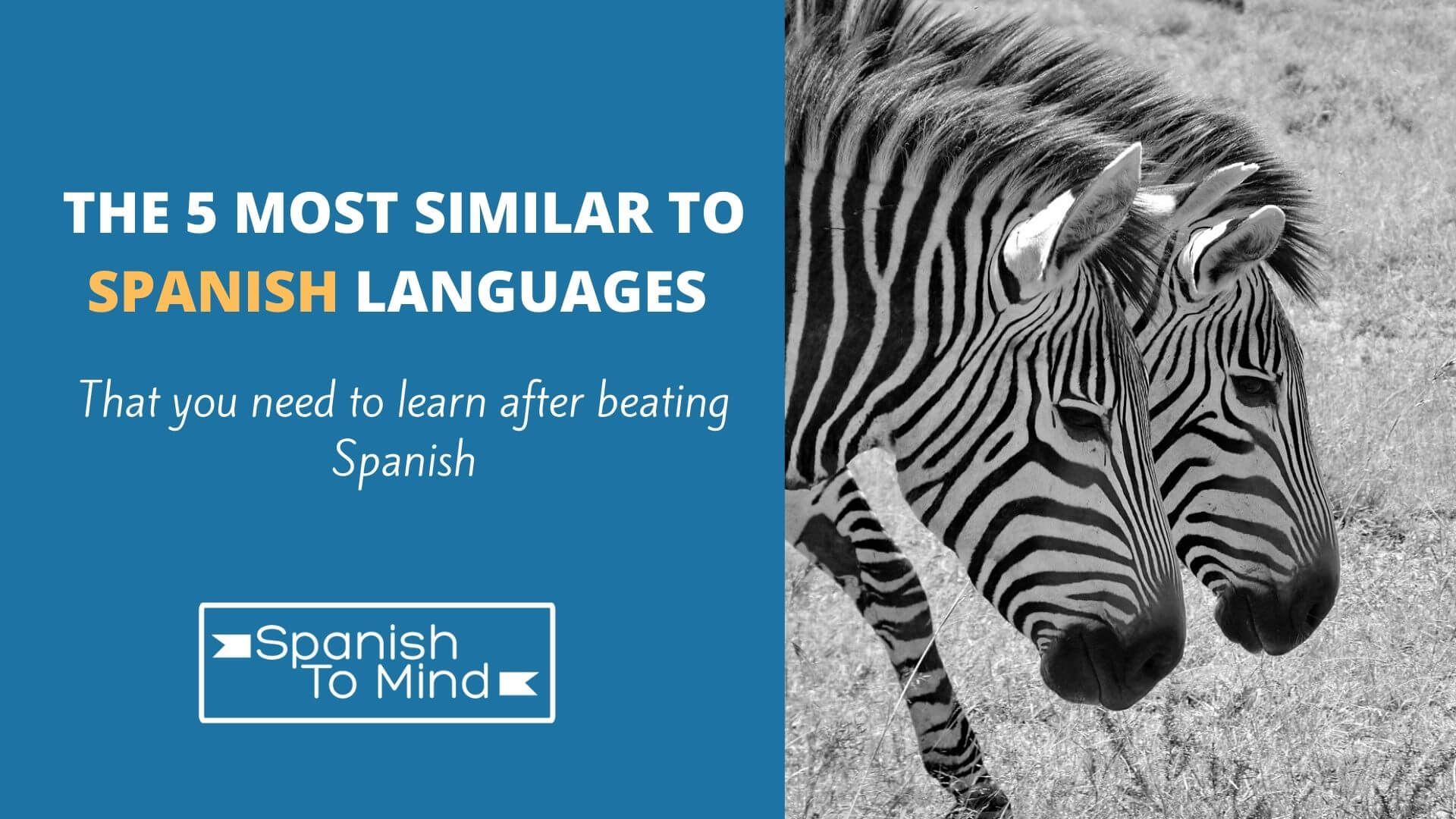 Did you know that more than 900 million people speak a language similar to Spanish?

That’s almost 13% of the worldwide population!

It’s crazy to think that so many people share similarities in the language they talk.

This is possible because Spanish is a Romance Language.

That means that it comes from Vulgar Latin, the same origin that lots of different languages share today.

In this article we’ll discuss 5 languages that are similar to Spanish.

So, whether you already mastered Spanish, or you are a native speaker looking for an “easy to learn” language, this article is for you.

If you stick to the end of the article, you’ll find 3 more suggestions that are surprisingly close to Spanish.

What Are The Most Similar To Spanish Languages?

As I was preparing this article, I found that the most similar to Spanish languages were:

During my research, I went to different websites, forums, and even YouTube videos.

It was amazing to see that everyone has their own opinion on what languages were closer.

I noticed that most people agreed that Italian and Portuguese are the closest ones.

But there were others who thought French was super similar to Spanish, and therefore, “it’s easier to learn” for those who already know Spanish.

So let’s talk about each of these languages.

This way, you’ll see for yourself why Spanish might give you the advantage to learn any of these 5 languages.

NOTE: I listed these languages according to what I consider is easier for someone who already knows Spanish.

This list goes from number 1 being the closest, to number 5 being the less similar.

As a Spanish native speaker, I feel like Portuguese is the closest language to my mother language.

I say this based on my experience having chances to meet people from different countries.

I’ve noticed that understanding Italian or French people are harder for me than understanding Brazilians or people from Portugal.

Of course, phonetics in these languages have differences.

But in general, Portuguese is pretty easy to understand for someone who knows Spanish already.

And after seeing this chart on wikipedia, it made more sense to me, that Portuguese is the most similar to Spanish.

It says that these two languages have 89% of lexical similarities, which means that the origin of words is going to look pretty similar in each language.

That’s the reason why native speakers from both languages can understand each other more easily than other languages.

Catalan is super close to Spanish.

It has 85% lexical similarities with Spanish, and that makes it way, way easier to understand by Latinos or Spaniards .

Just like it happens with Portuguese, if you invest time in Catalan, you’re going to need less time to master it than if you tried Japanese.

Catalan is spoken in several regions across Europe by 4.1 million people.

In fact, it’s great to hear how the accent of people speaking Catalan doesn’t change very much compared to when they speak Spanish.

This accent and the rhythm of conversations in this language might make it a bit easier to understand than if you hear Portuguese, which has a more strong accent.

Because of that native speakers of each language might get the classic feeling of:

“That language is so easy, I understand everything I hear”.

There are a lot of cognates or 82% in lexical similarities.

Which will make you understand the vocabulary in Italian easily.

However you can also find words that look exactly the same but meaning a completely different thing.

The vowels in both languages are almost the same with some more vowels in Italian,

Of course, phonetics and the pronunciation of Italian are different.

For a Spanish speaker like me, Italian sounds like a soft song that goes up and down in every word.

Something like when Super Mario talks in English, remember that?

I found the following video, which goes more in-depth on the differences between these two languages:

Even though French is popular for being very similar to Spanish, it’s not as similar to Portuguese or Italian.

If you know Spanish already, and you see a text written in French, then you would probably think that these languages are very similar.

The surprising thing is that spoken French might sound far from Spanish.

Especially when the guttural sound comes in, or the wide number of silent letters that Spanish native speakers may find confusing.

Yes, you can find words in both languages that look the same (cognates), but it’s not as much as Portuguese and Italian.

Here’s another video that goes a lot more in-depth into the comparison of these languages:

You’ll hear it mainly in Romania and Moldova.

This is a Romance Language that had a lot of influence by the Slavic languages in areas like:

Because Romanian comes from Vulgar Latin, you’ll find lots of similarities between Spanish and Romanian.

However, it’s closer to Italian, as they have 71% lexical similarities.

In my opinion, spoken Romanian is easier to understand than French when you know just Spanish.

I guess it’s different once you get used to the R pronunciation and the silent letters in French.

Nonetheless, I placed Romanian in the last place because it’s the one with less lexical similarities of all.

To clarify, that means that You’d need to invest more time in learning vocabulary.

As I did my research online, I found that people were suggesting 3 more languages that according to them were close to Spanish.

Honestly, I don’t agree with that because I heard videos in these languages and I couldn’t catch any familiar words to me.

However, when you look closer to these languages and pay a little attention to how they are written or pronounced, you’ll see the similarities that people talk about.

Tagalog: The official language spoken in the Philipines.

Arabic: At first, I thought it really didn’t have anything to do with Spanish.

Then, as I read more about this language, I found that, surprisingly, there are lots of words that are pronounced the same in Spanish and Arabic.

Here’s a quick 2-minute comparison between some words in Arabic and Spanish:

How Long Will It Take You To Learn A Language Similar To Spanish?

It depends a lot on you and the method you use to learn.

However, having learned a Romance language like Spanish will serve as a base for any of the 5 first languages we discussed previously.

That way, you’ll figure out the meaning of some words faster than if you were learning a totally new language.

I’ve heard of people who after learning Spanish go to Brazil.

Several of them achieve a decent conversational level in Portuguese quickly.

Of course, if you stick to grammar analysis or memorizing verbs, it’s going to take a long time to learn a new language.

However, if you don’t have the chance to travel abroad, you can always make huge progress by:

As you get into a new language learning journey, try to spend lots of time listening.

That’s going to have a faster and more powerful impact in your progress.

Go For A New Language Only If You Already Know Spanish

Unless you actually need to learn another language, like if you’re traveling to Brazil or France:

Keep going with Spanish until you feel like you get a decent level to understand native speakers and to have conversations easily.

If you need help to improve your skills in Spanish, my guide 7 Steps to understand fast speaking latinos might be very useful to you.

It’ll give you suggestions and techniques to finally master this beautiful language.

You may download it by clicking the image below:

Now, if you’re just passionate about language learning, and you already know Spanish, go ahead and embark on a new learning journey.

And by the way…

What is your next target language?