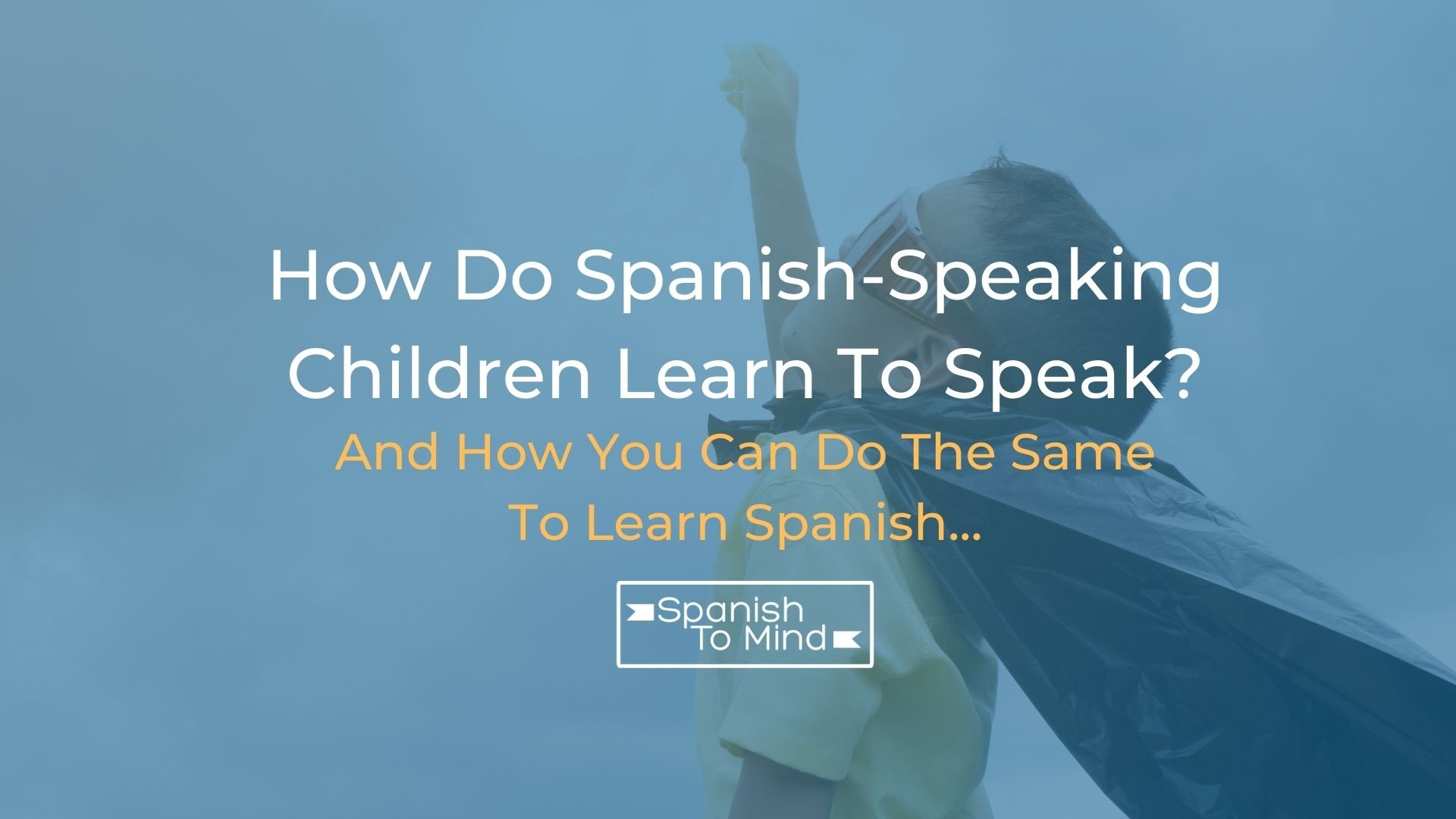 Isn’t it amazing how Spanish-speaking children can learn the language in such a smooth and effective way?

Wouldn’t it be awesome if you could do the same?

Learning your first language is such a beautiful, amazing and unbelievable process.

It all starts with a baby who only knows how to babble and cry.

In time, what seems to be magic, will turn that infant into a native speaker…

Compare that to the results adults get when they enroll in traditional language learning lessons, and what do we get?

So, what do Spanish-speaking children do that adults don’t when they learn the language?

In this article, we’ll take a look at the process of how children learn to speak and how you can imitate them, so you can optimize your Spanish learning process.

One of the most interesting things about how children learn to speak is that nobody teaches them how to do it.

It’s as if they were programmed to acquire the language that surrounds them.

However, one thing is for sure: if they don’t listen to the language they won’t learn it.

That’s something adults skip when they try to learn languages.

But they don’t hear the language, and those who do, don’t spend enough time listening.

Babies, on the other hand, listen to tons of Spanish.

From the moment the ears of a baby start to work, in the mom’s belly, he/she will have the capacity to react to his parents’ voice.

What’s even more impressive is that this will happen during the gestation period!

However, once the baby is born, he/she won’t be able to speak and say something like:

Until the infant produces his first word, he needs to spend some time popping, crying, laughing, eating, but overall listening.

During this time, parents will talk to him without a verbal reply.

That doesn’t mean the baby is mute, it means that he’s learning.

This period is commonly known by experts as the silent period.

We may say that this is a stimulation period, in which the baby’s brain is listening and learning.

Depending on factors like the family “atmosphere”, the parents’ stimulation, etc… kids will produce their first words after some months or years.

They’ll start imitating what they hear.

I know that most parents are super excited when they hear their baby’s first words like:

Everybody goes crazy when those first words come out of that little mouth.

After that, one thing is for sure: a kid won’t be passively listening to people talking.

As he/she grows up, a child starts to interact in more complex ways with people around him.

If you teach your baby lovely phrases, he’ll say them, but if he hears you swearing, he’ll use dirty words too.

My mom always says that kids will repeat every word he hears at home, and he will act just like his family act, and how true is that!

Have you seen a child replying to Dora the Explorer when she says :

“I need your help to stop swiper, you have to say: ‘no swiper no’”?

The kid usually starts to freak out as he yells:

That means that he’s learning and practicing his language skills as he’s fighting Swiper to help Dora.

RELATED: What is the best cartoon to learn Spanish with.

At that point, we can say that children use the language to interact with other people.

They’ll love playing with other kids, showing their parents their drawings, and talking to the people they like playfully.

Not only that but, have you seen how energetic a conversation between two kids goes?

This doesn’t happen all the time, but when they’re playing, it’s very common to hear them…

Sure! not all children yell but what I want you to notice is that their energy is super high when they use their language skills.

Speaking the language becomes an automatic, and effortless task

When do children start to produce a well-pronounced language, and with a more complex vocabulary?

According to the Linguistic Society of America, by the time children go to kindergarten, “he or she will have acquired the vast majority of the rules and sounds of the language”.

How amazing is that!

Regularly, kids go to kindergarten when they’re about 3 to 5 years old, and they already know how to speak!

From that point on, they will be able to express ideas easily.

Also, as they grow up, their language will become better, and their skills will be sharpened when they go to school.

It’s so interesting that the last thing children do is going for academic education, isn’t it?

That’s so contrary to how adults learn languages.

Grown-ups, on the other hand, want to learn the academic parts of the language first.

But, we won’t talk about that today…

RELATED: The One Thing You’re Missing If You Want To Speak Spanish Like A Native — 13 Experts Share Their Best Advice.

We may say that learning a language is a never-ending journey because even native speakers keep learning new words in their mother tongue during their lifetime.

It may seem like it happens almost magically, but there’s no magic trick.

Language learning is a process that takes time even for children, the interesting part is that it becomes an automatic brain task.

It’s just like when we learn how to drive cars. It takes time.

In the beginning, we might move the car hesitantly, and mistakenly.

It might be hard to deal with traffic when we’re beginners, but once we get to experience it, driving becomes:

The same happens when we learn our first language.

We always end up talking easily, without having to think about grammar or vocabulary.

Can you learn Spanish like Spanish-speaking children learn the language?

Our brains are specifically designed to acquire a language.

However, as we grow up, we develop certain thought patterns and limiting beliefs that prevent us from learning languages as children do.

This is the reason why adults can’t learn like children.

It’s not like if children are superior to learn Spanish, they follow their instinct to learn it.

For example, in school, they teach us that Spanish is an academic subject and that it must be learned this way.

Not only that but adults have had so many experiences in life, that they may have developed fear.

These are some of the many thoughts that might cross your mind anytime you want to practice your Spanish.

So, I have bad news for you: you are certainly not a child.

Nonetheless, you can imitate what children do to learn languages.

You need to embrace your Spanish learning time with a different mindset:

Think of yourself as a child who’s just learning to speak a language: Spanish.

Certainly, the beliefs that grown-ups have are hard to break.

The great news is that our beliefs can be changed, you can think differently, and optimize your learning time.

You can imitate what children do to learn Spanish.

Today, we’ve seen that children engage in certain activities that adults often struggle to do:

I’m not saying that this is the secret formula to learn Spanish magically like a child, but one thing is for sure:

It’ll help you progress much faster and learn more effectively.

If you want to imitate what Spanish-speaking children do, then look for resources that require you to listen to a lot of Spanish.

The more you listen to Spanish the better.

You will have a strong foundation for when it is time to speak, just like a baby during his “silent period”.

Even better, you’ll be able to understand native speakers much easier.

Of course, you don’t have parents who tell you:

“Say something in Spanish my beautiful English speaking baby”

But there’re tons of resources out there which can help you imitate everything you hear.

My stories are a great resource for that.

But, if you have a better one then stick to that, listen to it, and imitate everything you hear.

Just like Spanish-speaking children interact with their parents, friends, teachers, and the TV, you have to do the same.

If you understand Spanish, but you don’t speak it, you can’t say that you know Spanish.

After all, the purpose of a language is to communicate and connect with other people.

My point is that you have to speak Spanish with other people at some point.

You need to go beyond:

You have to connect with real people, and it would be even better if it’s native speakers.

If it’s too hard to find natives around you, or if you’re just afraid of talking to them, you might use online resources.

The internet is full of language exchange sites.

Now, it doesn’t mean that you have to be on a video call with another person.

You could even do it with a traditional phone call, or by sending voice notes through WhatsApp.

I’m sure that googling for a language exchange platform, will give you very useful results.

No matter what route you choose, remember:

Connection and getting to know people is the beauty of language learning, that’s how children learn their mother tongue!

You can imitate lots of different actions that children do when they learn languages.

Doing that is going to have a positive impact on your Spanish.

In this article, we learned some of those activities, and you learned that you may implement them during your learning time:

I can’t promise you that you will learn magically like Spanish-speaking children learn their mother tongue.

Not because you are not capable of it, your brain is perfectly equipped to learn languages this way.

I can’t make you that promise, because our beliefs and thought patterns as adults may make it difficult to learn this way.

What I can say for sure is that, if you imitate what children do to learn Spanish, then you will learn much faster and more effectively than how you are doing it now.

Also, if you want to find out more about how to learn Spanish like a child, then you have to download my free ebook:

You’ll get it as a welcome gift, right after you sign up for my newsletter. Do it in the form below: