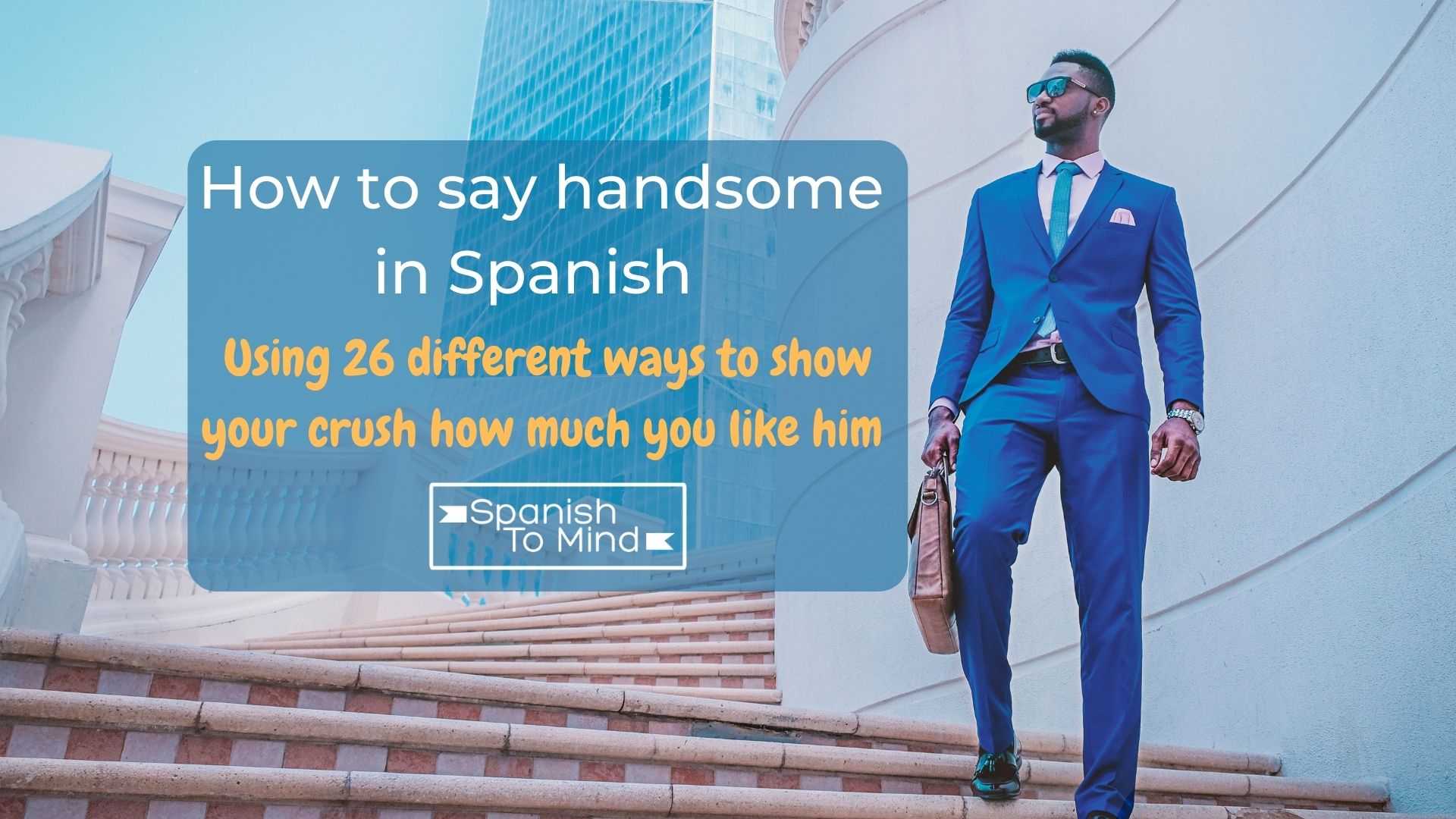 My friend Monica from the USA was married to a Colombian guy, she was writing a letter to him and she wanted to say that he was very handsome in Spanish.

Question for you, my dear friend who wants to learn Spanish:

How should Monica tell her husband that he is a good-looking man?

I’m pretty sure that if you were to advise my friend, you would tell her to call him “guapo”.

After all, that’s the translation that Google throws right after you type “handsome” into the Spanish translator.

But, is Guapo the only way to call a guy handsome in Spanish?

In this blog post, we’ll go through 26 different ways to call a guy handsome in Spanish.

26 different Expressions to call a guy handsome in Spanish

You have to know that some of these expressions are very common in Colombia, the country where I grew up in.

Some of them are also neutral and you can use them anywhere around the world.

Don’t worry, I’ll specify when and where to use them, so you can be safe and speak confidently with that crush of yours.

Now, you have to know that In Spanish, it’s NOT the same if you want to compliment your husband, a kid, or simply your crush.

In other words: Guapo could work for all, but if you want to be more accurate, you have to know more than that.

You need to select your words because when you go beyond guapo, you could use words to send a message that might not be proper, or it could even have sexual intentions.

And we don’t want weird confusion, do we?

So, since our goal when we speak Spanish is to be clear in our messages, I arranged the following list according to how attractive a man looks to you.

We’ll start with the least “hot” and neutral expressions to the hottest and the ones that communicate desire.

“Bello” means beautiful, however, this word might sound a little delicate and it has a touch of sweetness.

If you want to call a guy this way then it would be better if you do it in a poetic context, Like:

This word is also commonly used to describe kids or babies. For example:

The translation for this word is “pretty”, and this is how most girls would refer to a nice-looking guy when they try to be neutral, without actually liking the person.

However, if you are a man and you call another guy Lindo that will communicate that you like the other guy in a romantic context.

Here are some examples using Lindo:

This adjective works pretty much like the previous one.

It sounds very neutral when girls use it, so if you hear a girl saying that a guy is Bonito, they’re not saying or implying that they like him, they’re just commenting on how good looking he is:

This word is especially useful when you want to say that a guy you’re describing has something nice looking, but he is not that handsome.

There’s just something about this person that decorates him, like his attitude, his grooming, the way he talks, etc…

This is a general word we use to describe an attractive person.

Actually, that’s the exact translation for “attractive” in Spanish.

People use this word to compliment a man formally.

It’s just like if you wanted to praise someone who you respect or communicate that person is attractive without getting into details.

People use this word in Colombia.

I’ve never heard it anywhere else, and it just means “good looking man”.

It’s also important to realize that in this country, heterosexual men use this word when they comment about good looking another man is.

This word kinda gives the idea of a man saying that to another dude looks good, without any sexual or romantic intention.

This phrase is a little variation of the previous word.

This phrase is a very formal way to say handsome in Spanish.

Not only that, but if someone is a “buen mozo”, that means that he has a nice body, he’s tall and he probably won’t be unnoticed when he is among other people.

I’m not sure if in places outside of Colombia they would use this word, but people from the coast in this country use it to call someone handsome in Spanish.

This is how theyuse it:

This is the exact translation for the phrase “good looking”.

If you say this, it means that you’re just admiring the beauty of the guy, nothing sexual or like if you were attracted to him.

He just looks good, that’s it.

Actually, I have to mention that women and other men might also use this phrase to imply that a guy looks good in a formal way.

If someone asks you how do you say handsome in Spanish, this is probably the first word that comes to mind.

And that’s the accurate and close translation for handsome in Spanish.

Here are two examples with this word:

The translation for this word is “fancy”.

However, people might use “elegante” in Spanish to describe a handsome man too.

In fact, if you say that someone is elegante, the idea you communicate is that the person you’re describing looks good, and he takes care of himself.

Now, if you use this adjective, it means that you don’t want people to think that you like him.

Usually, I hear people saying that a man is “Elegante” when they describe a middle-aged man.

Check out these examples:

This is one of those phrases that can’t be used with the verbs “ser” or “estar”.

Because with this phrase, we’re saying that the guy who we talk about has something that makes him look good and that something is a good height, and great body.

Here, we’re talking about the presence of a man.

If you translate “tiene presencia”, then you’d get: “he has a presence”.

Now, If you hear that in Spanish, that means that the man being described can’t be unnoticed.

His face might not be the best one, but his good body makes a difference because everyone around him is probably going to notice him.

Of course, you can always call a guy “hermoso”, which means beautiful.

I think this is the highest level of describing a handsome man that doesn’t include slang or an idiom.

However, have in mind that a heterosexual man would rarely call another guy “hermoso” unless he’s doing it in a respectful a very formal way.

Honestly, I didn’t know this word. I’ve never heard it in Colombia, but I learned it as I was researching to make this article.

I found it everywhere, and it comes from Greek mythology.

People use it to refer to a young man who has extraordinary beauty.

Here’s an example I found online:

People use this word in many countries of Central America, I have especially heard it in Mexican TV shows, movies, and youtube videos.

We can say that this is just an informal way to call a man handsome, for example:

This word is very popular among Latin American Spanish speakers.

Honestly, I’m not sure about people using this word in Spain, and If you’ve heard it in there, let me know in the comments at the end of the article.

It’ll be interesting to hear about it.

“Papacito” is how most people would call a handsome guy in Spanish, at least in an informal way, the meaning is kinda the same as “hottie”.

Two examples with this word:

A variation of the word “papacito”, but adding “zote” to maximize the meaning of what you want to communicate.

These are some examples using “papazote”:

The word “papi” can mean some different things, especially because in some parts of Latin America people use this word as slang for “buddy”, and even mothers may call their male children this way.

However, and especially if you’re a woman and if you say that a guy is a “papi”, that means that you’re attracted to him, and you like him.

Colombians may also use the expression “Mero papi”, which means the same thing: What a hottie, or he’s quite a hottie.

If you type “Churro” on Google, you’ll find that this is a snack people prepare in some parts of Latin America.

A churro is some kind of sweetened, and full of sugar bread that may come in different shapes.

Spanish native speakers love churros, and therefore, if you call a guy “churro”, that means that you find him very attractive.

It’s kind of slang for hot or hottie.

This is a Colombian expression, and it’s quite curious because it doesn’t make sense to me.

You see, “tarrao” comes from “tarro”, which means bucket.

Now, when we maximize the word using “ado”, and abbreviate it with “ao” to come up with “tarrao’”, you’re calling a guy a big bucket.

I have no idea, but some women in Colombia (at least in Medellín) use this expression to mean that a guy is hot, like this:

We don’t use this idiom in Colombia, and according to what I found online, people use it mostly in Spain.

Basically, it means that, in your opinion, the guy you describe is extremely attractive.

This phrase might sound a little sexual, and if you say this to a man, it means that he is extremely handsome in your eyes, and he kind of turns you on.

This expression is purely physical, and it means “he is hot”.

If you describe a guy as “esta bueno”, that means that you don’t care much about his face or personality, the focus is how good his body is.

A guy like this would probably have big muscles, and looks pretty good for you:

This expression works pretty much like the previous one, but this one is trying to maximize how hot the guy you’re describing looks for you.

Again, if someone uses this idiom, then the image that should pop up in your head is the one of a big and attractive man.

Remember that if you don’t know the meaning of the words, you might be in danger of using the wrong expressions with the wrong people.

So, if you want to be safe just go with “guapo” which is the translation for “handsome”.

That word is going to work for every situation.

It’s going to sound neutral and it won’t leave people thinking that you like a guy with romantic interest.

Other Expressions that deserve to be mentioned in this list are:

And there you go, those are some expressions to say handsome in Spanish.

Here’s an infographic you can pin, save or print so you can have access to these expressions at any time:

I’m sure that some of these expressions might be surprisingly funny for you, especially because they probably don’t make much sense in English.

Now… remember my friend Monica at the beginning of this article?

She wanted to praise her husband and call him “guapo” in a letter.

So, here’s question for you:

Which of the 26 expressions you learned in this blog post would you advise Monica to use?

Let me know in the comments! 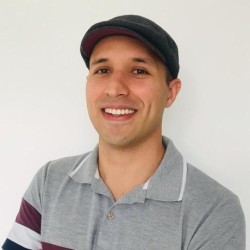