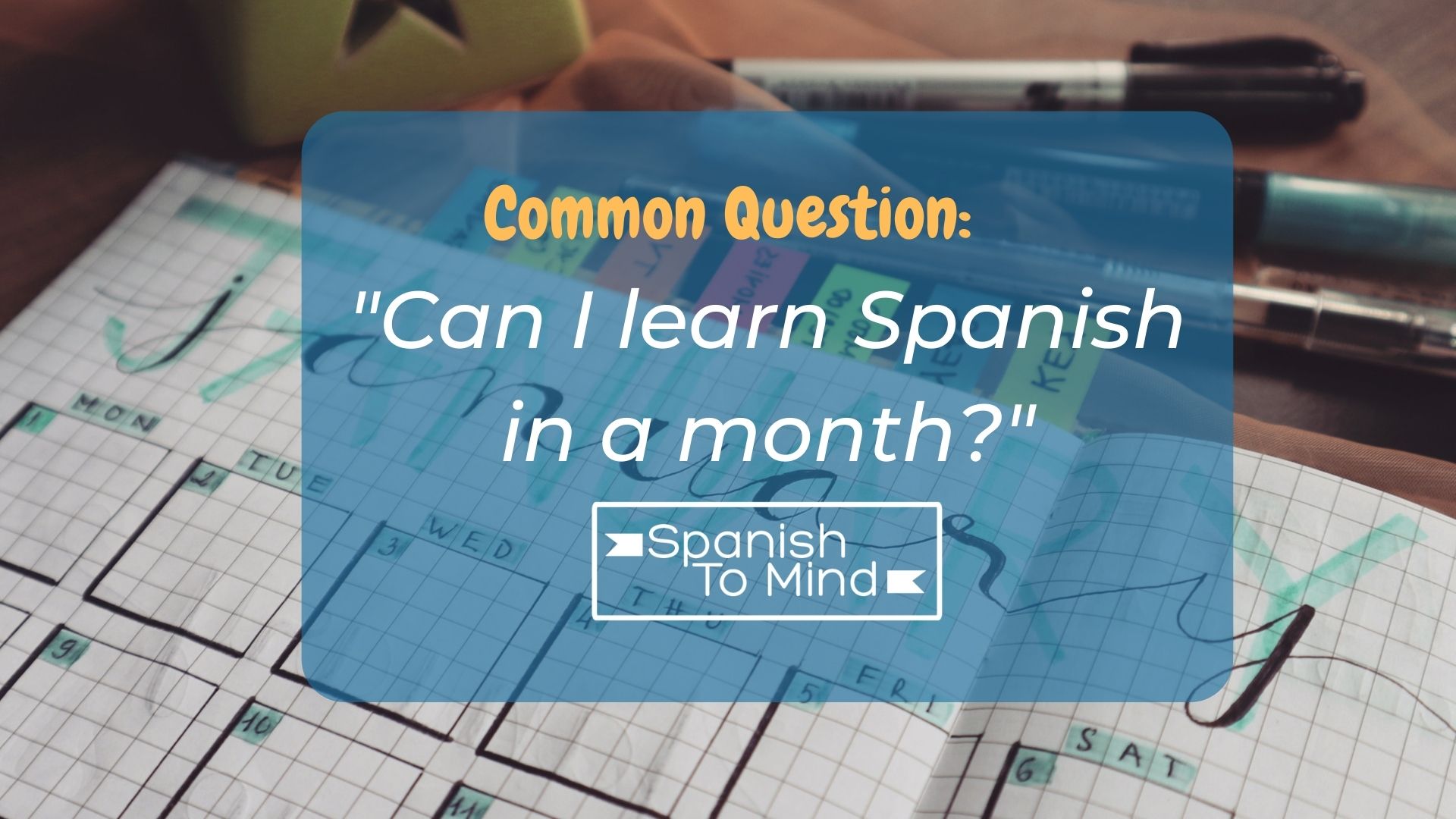 Some passionate students may ask: “Can I learn Spanish in a month?”.

People who learn Spanish often feel in a hurry to get results and that’s when these kinds of questions arise.

A while ago, one of my students was telling me that he needed to learn faster because his girlfriend only spoke Spanish.

But, is it possible to learn Spanish in such a short time as “one month”?

A straight answer is: Yes, and no…

“what kind of answer is that?”, you might be wondering.

Well, certainly you can learn Spanish faster or slower depending on how you learned the language.

Now, if we talk about a month, it all depends on where you are coming from.

In this article, we’ll go through the reasons why learning Spanish in a month would be impossible and why it would be possible for you.

Let me ask you a question first:

What’s your goal to learn Spanish?

Affiliate Disclosure: This article contains affiliate links which means that if there’s a link to a product I recommend, and you decide to purchase it, I’ll get a small comission at no extra cost to you for promoting it. Have in mind that I only recommend high quality products to improve your skills in Spanish. I always test everything before promoting it.

If you tell me that you want to learn Spanish in one month, that means that you’re in a bit of a hurry.

What’s your goal to learn Spanish?

Do you want to learn Spanish just because you’re going on a two-week holiday vacation to South America?

If that’s the case, then you probably just want to learn some traveling vocabulary and a couple of funny phrases.

That’s perfectly achievable in one month.

Or perhaps you just need to pass an academic test and all you need is to learn how to use some grammar rules to get a good grade.

If that’s what you need Spanish for, then, of course, you can sit down:

At the end of the day, learning vocabulary for a test is just a memory thing, and Grammar only requires you to memorize formulas and exceptions.

But what if you want more than that?

What if you want to connect and communicate with Spanish native people?

That’s a whole different story, and as I said before it all depends on where you come from.

Can I learn Spanish in one month?: Your background matters

What I mean by your “background” is the influence you’ve had from Spanish in your life.

It isn’t the same if you were raised by Spanish-speaking parents who spoke Spanish at home than if you’ve never heard this language in your life.

An example of this is a friend of mine from Florida named Isaiah (Isaías en español 😅 ).

His parents were Puerto Ricans and they rarely spoke Spanish with him when he was a kid.

However, since his mother was in touch with relatives from Puerto Rico, my friend heard the language here and there.

Although he didn’t have big exposure to Spanish, there was some degree of influence from the language.

Now, it doesn’t mean that he can speak Spanish today.

Isaiah has a hard time when he tries to express himself spontaneously.

He needs to think hard about what words he wants to use, and understanding native speakers is a manageable task for him.

A person like that would probably be able to learn Spanish faster than someone who knows 0 Spanish.

So, how long would it take for Isaiah to master Spanish?

We can’t say a month exactly because there are other factors that we’d need to consider, but he would probably make progress faster.

How long does it take a total beginner to learn the language?

So let’s say that you’re an absolute beginner, you know 0 Spanish and you’ve never been influenced by this language in your life.

How long would it take you to learn the language?

According to the Foreign Service Institute, learning Spanish requires 600 to 700 hours of training.

But, let’s be realistic…

It’s not very likely that you’re going to spend 700 hours in just one month learning Spanish.

You have a life to live!

Of course, if you invest a good amount of learning time in your first month, you’ll make good progress.

But, that’s not enough to learn to communicate with Spanish native speakers effectively and understanding them.

(And that’s the whole point of learning Spanish, right? 😎 ).

Think of traditional Spanish lessons, how many hours would it be per week?

Even if it was an intensive program, it there wouldn’t be plenty of hours in one month to give you all the time you need to learn Spanish.

Now, compare that against the amount of time a baby takes to master his native language.

How long would he take to learn?

It definitely varies on the child and the kind of stimulation his parents give him, but a month wouldn’t be realistic even for the most gifted of the babies.

What if you took lessons in the past?

If you took Spanish in high school or perhaps you went through courses when you were younger, that gives you an advantage over other students.

However, that won’t assure you will learn Spanish in one month.

You need to think of how much progress you made during that previous course.

Are you able to communicate ideas in Spanish (even though you struggle) ?

If you are and you invest time and effort during the following 30 days to improve your Spanish skills, then a month of using the right method will do tons for you.

Whatever your circumstances are, just try to be realistic, and if you’re still wondering:

“Can I learn Spanish in one month?”, then ask yourself:

Why do I want to learn Spanish so fast?

We live in a world that promises instantaneous results everywhere.

Basically, they’re saying they can turn you into Batman or Wonder-Woman without time or any effort.

But, let’s be realistic, even Batman needed tons of training until he became the legendary dark knight!

Promises of quick results surround us everywhere, and language learning is not an exception.

I mean, I’m not saying that you cannot learn Spanish faster, It is possible!

But, learning a language from 0 to mastery in only one month is a false promise.

If someone tells you that you can learn Spanish in one month, he’s probably trying to sell you something.

So be on the watch, and remember that learning Spanish requires time and effort.

Don’t let yourself be fooled!

How can you learn Spanish faster?

If you want me to be honest with you, “faster” isn’t what you should aim for.

Instead of that, you need to think of “effective” learning.

Because just as some children take longer or faster to learn to speak than others, you may take less or more time than other people to learn Spanish.

However, in that process, make sure you use a good method to learn Spanish.

Instead of that, imitate what children do to learn languages.

They end up having better results than what adults get when they enroll in language lessons.

If you think about it, kids:

That’s how you have to do it, you need to think of yourself as a kid who’s just learning to speak a new language: Spanish.

Now, one of the best ways to speed up your learning process and doing it more effectively is by listening to stories.

My courses could be a great resource to do that.

I won’t promise that you will learn in just a month, but you’ll make progress quicker than traditional methods.

So if you know absolutely NO Spanish, you may look for other programs based on stories.

Like the Spanish uncovered for beginners program by Olly Richards.

That course uses stories to introduce you to Spanish.

But you don’t have to buy any course if you already have a good plan to learn Spanish.

I only suggest those products because I know they’re good resources to learn.

You don’t need courses to learn Spanish, you can also do it on your own.

Whatever method you choose to learn Spanish make sure it gets close to how children learn their first language.

You may do so with activities such as:

Make sure you enjoy your language learning process, it can be very rewarding.

You don’t have to stress out by pushing yourself to learn Spanish so fast as in a month.

Just remember that having fun will make you learn Spanish quicker and more effectively.

Learning Spanish in one month is possible if you have advantages like coming from a Spanish background, or if you’ve taken lessons in the past.

Of course, in addition to that, you need to use the method to learn Spanish.

Now, if you are a normal person who’s just looking to start learning a foreign language:

It’s very difficult and almost impossible to learn Spanish in only one month.

However, no matter what your circumstances are, make sure you enjoy the learning process.

If you want to know more about how to improve your Spanish, you may download my free guide: 10 Secretos que nadie te dice para hablar español como un nativo.

You’ll get it as a welcome gift after signing to my newsletter in the form below: