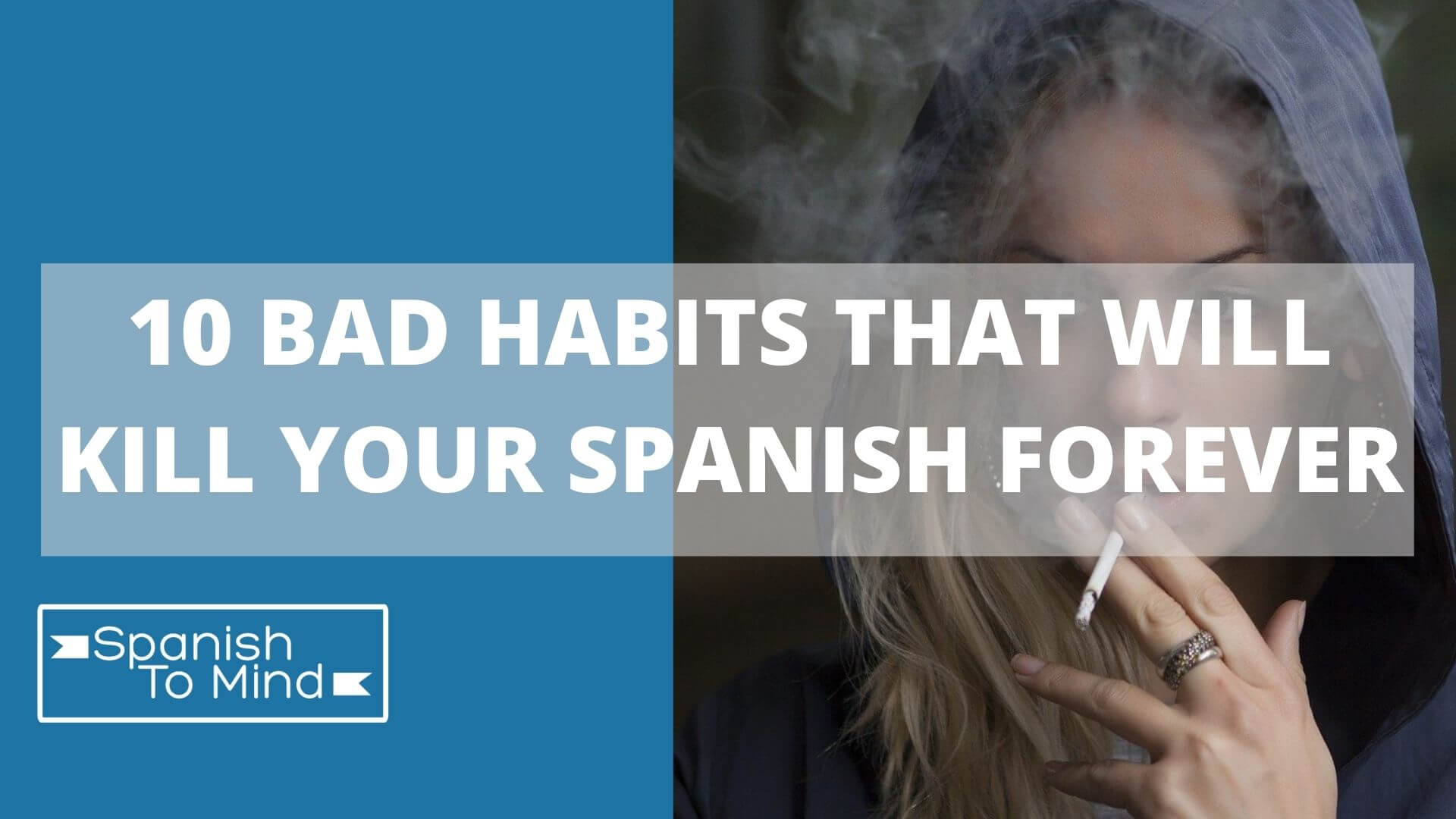 Bad habits may take you to give up on your Spanish learning. Learn what those habits are and avoid them immediately.

Wouldn’t it be cool to be able to see the future, and watch how your life will be in 15 years from now? Well, my friend, Marty McFly can certainly help you figure out a way to do that.

Yeah, I know, Marty McFly is not real and humans can’t foretell any future, it was just a bad joke.

However, even though we can’t say what our lives will look like tomorrow, we can see things coming due to what we do in the present, mostly from our habits.

For example, a person who starts to develop bad eating habits may start consuming lots hotdogs and hamburgers. The consequences of these bad habits might not be obvious in the moment, but over time lots of health problems could take the person to death.

You see, I’ve worked as a language teacher for about 5 years now. During my experience, I have learned to identify which students will achieve the ultimate goal for any language learner: fluency.

In this blog post, you will see 10 of the most common habits that in my experience as a teacher, will lead you to stop studying Spanish without being fluent.

Why should you know these habits, isn’t the point just to study Spanish?

Knowing these signs should be a very important step for any language learner.

If you identify them on time, you may be able to make adjustments to your Spanish learning so you end up speaking confidently and fluently, instead of just telling everybody things like:

“…Yeah, I took some Spanish lessons with some dude called Diego on the internet. I mean, He was nice and everything, but I’m just not good for Spanish…”

Now, before we go directly to the heart of this article, you need to know that these signs that I am telling you about are mostly habits… Yes, bad habits that you need to overcome right away.

Did you know that the habit of smoking is very bad for your health?… Well, most people in this 2018 is aware of that.

Think of the following habits as that smoking addiction in your Spanish learning.

Oh! and don’t forget that you need to quit these habits in order to learn to speak fluently.

Some people need to know why Spanish is as it is, and grammar is fine to find these reasons. However, learning grammar is one of the habits that could become counterproductive when you leave behind the beginning stages of the language.

Have you found yourself struggling to conjugate the verbs in the middle of a conversation with a native speaker?

Well, that’s the effect that analyzing grammar has on you.

This happens because grammar doesn’t teach you how to speak and communicate. Instead of that, it teaches you a bunch of formulas that you can’t recall when you’re having a quick and spontaneous Spanish conversation.

Luckily, the fact is that you don’t even need grammar rules to speak fluently. In fact, regular native speakers don’t know anything about grammar in Spanish, and they speak almost at the speed of light.

2- You’ve been using textbooks for a long time now

Textbooks may be helpful during the beginning stages of learning Spanish, but using them as an “intermediate level” tool can screw things up.

This is one of the habits that you could have just for a time and then quit before it turns into something bad.

It probably helps you:

However, textbooks don’t teach you the real language. I’ve seen that students who stick to these tools have a hard time to understand real native speakers, TV shows, or real spoken Spanish in general.

This happens because textbooks teach you a very formal, and sometimes, academic language. They give you only one correct way of saying things, but in real life, Spanish is quite different.

The difference between textbooks vs real life

Just think of someone who learns in a textbook how to ask the name of another person in Spanish, this is usually presented in a textbook as “¿Cómo te llamas?”.

Now in real life, this person could face native speakers expressing the same thing very differently, it could be something like:

Not to mention the habit of native speakers to say phrases altogether. For instance, in Medellín, Colombia, instead of “¿Cómo se llama usted?”someone might hear something like “¿Cómoellamauste?”.

Now, for someone who sticks to textbooks, it would be almost impossible to decipher what native speakers say when they talk this way, which is almost, all the time.

I know you are probably thinking:

“So, how in the world am I supposed to understand native speakers?”

In my free ebook, I teach you a powerful technique to learn to understand native speakers easily.

3- You focus on studying Spanish

Studying Spanish might actually be harmful to your learning because you will keep seeing the language as an academic subject that needs to be graded.

For some people, thinking of ‘study’ could imply stress.

There are even people who feel terrified every time they face tests and grades, so stop that!

Make the language alive for you and enjoy the process of learning.

It doesn’t matter if you keep making pronunciation mistakes, just live the language!

4- You stick to word lists

I mean if you think about it, a word list has what you need to express more ideas in Spanish: vocabulary, right?

Everything is right there in the paper, isn’t it?… Well, not exactly.

Memorizing a list of words may help you learn just that: words. You may even see them in a book and recognize them.

No! In fact, for some people memorizing a long list of verbs, adjectives, or whatever could become a hard memory job.

How will you learn new words then?

In this resource I share a powerful habit that you can implement instead of using wordlist, I suggest you download it now.

You have no idea how many students I’ve had who come to my classroom saying things like:

The truth is, if you keep saying things like the ones listed above, you will be conditioning your brain for failure.

Stop giving those loser excuses that so many people use around the world.

Instead of that, replace them with positive statements and start conditioning yourself for success:

6- Spanish is just an academic subject for you

For many college careers, people need to pass a Spanish test that demonstrates that they speak some level of Spanish.

That’s fine if you see the test as a challenge to prove to yourself that you are making progress in your second language, however, if you:

And if your only goal is to pass “the stupid Spanish test”, then it is bound to happen that as soon as you pass the test, you’ll forget your precious and valuable second language.

7- You don’t listen to Spanish

This, in my opinion, is the clearest sign that indicates that you’ll never be able to speak Spanish fluently.

Just think about it, what do babies do when they don’t know how speak yet? (different than crying and pooping)

They listen! babies listen first, and during a period of time, that’s all they do.

Now, do you listen to Spanish?

How are you going to understand Spanish native speakers if you never listen to Spanish in your learning time?

Reading or using phonetic charts won’t prepare you for the quick, spontaneous, and not grammatically correct Spanish that native speakers use in their daily life.

In fact, I’d say that 90% of the time you invest in learning Spanish should include listening activities.

The more you listen to the language, the more phrases, idioms, or phrasal verbs you will learn. This will make your understanding and use of Spanish easier, and automatic.

8- You don’t repeat what you listen

Of course, one thing is to listen to something new, look up for its meaning, and go:

“Wow cool! I didn’t know this phrase in Spanish… let’s just change this audio and see how I do with the next one.”

If you don’t repeat what you listen, you won’t internalize the new vocabulary or words you learn. Just have in mind that repetition is the key to mastery, and you want to master Spanish!

So instead of just listening to something new once or twice, do it many times.

That way, whenever you hear the phrases you internalized, you will identify them automatically.

9- It’s not fun or interesting for you.

Everything you listen in Spanish will have an effect on you.

Just remember that when you listen to a language, in the end, you are listening to messages, someone is trying to communicate something to you.

So it will either be senseless and easy to forget, or it’ll be a strong message, an idea that sticks in your mind for a long time.

My point is: if you listen to a boring, and typical conversation like:

You’ll definitely get to the point of saying:

Now, if you listen to interesting things, maybe traveling podcasts or vlogging videos, your attention will be captured, this way ideas and even new expressions will be easier to remember.

I must admit, this point is one of the most difficult things for me when learning languages.

The reason is that, as adults, we are busy and that could become an obstacle to learn to speak a new language fluently.

The sad thing about not being regular when learning Spanish is that we could stop repeating Spanish for too long. You may forget many new things, which means that your progress will be slower.

Or you could even get to a point of giving up, perhaps thinking:

“I knew Diego wasn’t right, Spanish takes a long time to learn for me, there must be something wrong with me”

And as we saw previously, there is nothing wrong with you.

The problem could be that you just don’t learn Spanish on a daily basis.

Something I always recommend to busy people is to listen to Spanish for just a small amount of time during the day.

15 or 20 minutes in the morning will bring a lot of benefits when doing it daily.

Now, I want to ask you a question:

Do you have one of these 10 bad habits when learning Spanish?

How are you going to stop that bad habit? Let me know in the comments below.

If you’re an intermediate student of Spanish, I’m sure you’ll love my free ebook in full Spanish: 10 Secretos que nadie te dice para hablar español como un nativo + its audio version. Sign up in the form below and download it for free now: